Two-goal Andre Ayew insists West Ham United’s never-say-die attitude inspired them to come from 2-0 down to defeat Tottenham Hotspur in the Carabaco Cup.

The Hammers’ hopes of reaching the quarter-finals looked all but dead and buried when first half goals from Moussa Sissoko and Dele Alli sent them back to the dressing room two goals behind at the break.

However, a pair of typically predatory finishes from the Ghana star, followed by a towering header from Angelo Ogbonna, completed a sensational and unforgettable comeback victory at the Home of Football.

Now, Ayew says the challenge is for West Ham to maintain the same levels of intensity and commitment when they travel to Selhurst Park for an important Premier League derby with Crystal Palace on Saturday.

“I think the game started really tough as Tottenham took the lead after five minutes, but we stayed confident and we weren’t down,” said the Sky Sports’ Man of the Match. “The coach [Slaven Bilic] had the words at half-time, so I want to congratulate the whole team for what they have done today.

“It’s a massive win, but we need to stay calm because we’ve got a massive game on Saturday. We need to enjoy this win tonight, because it’s a derby and it’s Tottenham and because it’s always a great victory, but prepare for Saturday because it’s very, very important.

“We knew if we scored a goal early in the second half, we would have a chance, but we also knew Tottenham have a big squad and great players and a great manager. Tonight, we have shown we have character and we have quality, but we need to relax and work hard, because Saturday is a big one.

“Saturday is very important so we’re going to prepare, have a good rest, then work hard and hopefully we can collect the three points.” 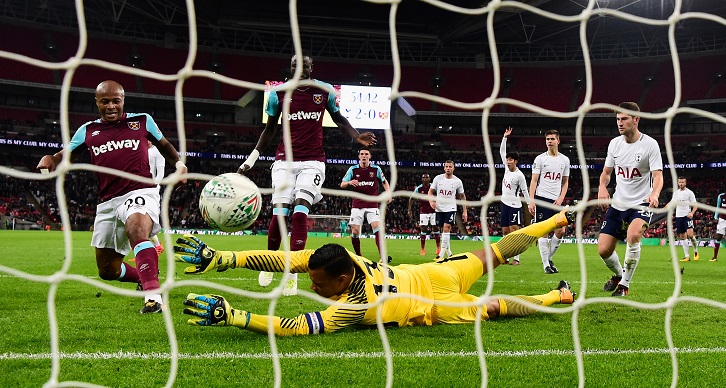 Ayew said the Hammers’ second-half performance showed the team are not only united, but united behind manager Slaven Bilic.

“We showed a lot of determination in the second half. It was a very good win, considering what we’ve been going through in the Premier League.

“It’s not been easy, it’s been a tough time, but we have a lot of quality players and we need to stick together and keep fighting as a team and we’ll get out of this situation.

“When you’re in a Club like West Ham and the results are difficult, the manager is under pressure, and the players are too, but we just need to keep working hard. The manager knows the players are behind him and will give everything, not just for him but for themselves too, because we have to wear the shirt with pride.

“We’re going to do everything to get some points and get out of that zone. There is a fighting spirit and we need to do it week-in, week-out.

“This is a good win for confidence. It’s a derby with Tottenham at Wembley and we were losing 2-0 at half-time, so there are a lot of things from this which smell good, but in football we cannot get carried away. We need to work even harder on Saturday if we want to get something.”

Inter : Asamoah has become a regular face on the bench

Turkey : Prince Boateng comes off the bench to help Besiktas win after going 2-1 down