Ronaldo, who previously won the award in 2008 as well as in 2013 and 2014, when it was officially the FIFA Ballon d’Or, is only the second player to win it a total of four times, trailing only Messi’s record of five.

The honour caps a memorable year that saw Ronaldo win the Champions League with Real Madrid and the European Championship with Portugal — the country’s first major footballing silverware.

“It is a special moment. It means that all my sacrifice was worth it. I feel very happy to win this. I worked very hard,” Ronaldo said in accepting the award.

“A lot of people helped me get here, and it is not easy to get here. You can count on one hand players who maintain this level year after year. I am one of them, and that is a source of pride for me.” 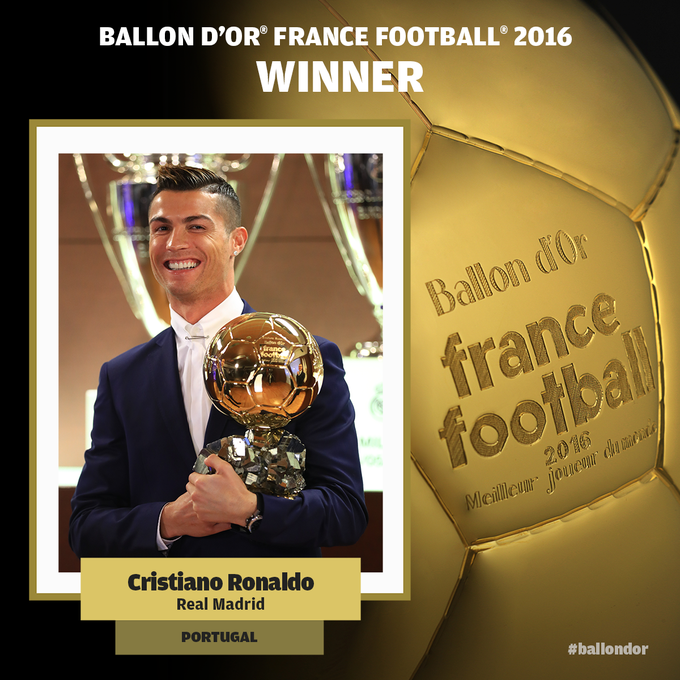 Ronaldo, 31, has scored 51 goals in 54 games for club and country in 2016. The 13 goals he scored for Portugal are a career high for him in a calendar year.
- Advertisement -

His 31 goals in La Liga trail only Barcelona’s Luis Suarez for the most in Europe’s top five leagues.

“This has been the best year of my career from both a team and individual level,” Ronaldo said. “To win the title for Portugal was what was left to achieve on my résumé, and it was one of the most important moments. But to win Champions League as well with Real Madrid was huge.

“It is a huge honour to win the Ballon d’Or. I am very happy. This is a dream come true, and it is the fourth time. I feel very proud. This win is for my teammates in both the club and the national team. It is incredible to earn this trophy again.”

Griezmann, 25, finished third after winning the Golden Boot at Euro 2016, a tournament in which he helped France reach the final. He also played an important role for Atletico as they reached the Champions League final, which they lost on penalties to Real.

Only Ronaldo and Messi have won the Ballon d’Or since 2007, when Kaka won the prize.

Ronaldo’s fourth award brings Real Madrid’s tally to nine, breaking a tie with AC Milan and Juventus for second most behind Barcelona’s 11. Portugal moved into a tie for the third-most-awarded country, level with France on six — one behind leaders Germany and Netherlands.

Earlier this year, magazine France Football, which has organised the Ballon d’Or award since 1956, ended a six-year relationship with FIFA in which they combined with the world football governing body’s World Player of the Year award.

After the split, FIFA announced the introduction of its own Best FIFA Men’s Player award — with the same three finalists — to be announced at a ceremony in Zurich on Jan. 9.

The complete 2016 Ballon d’Or placements, as announced by France Football: