Zone Two leaders Samartex 1996 will lock horns with long standing rivals Ebusua Dwarfs on Match Day four of the Division One League at the Nduom stadium on Sunday.

Samartex lead the Zone with 9 points after winning all three matches in the Zone following victories against Asokwa Deportivo (2-0), Basake Holy Stars (2-0) and Nzema Kotoko (1-0). These wins have catapulted them to the apex of the table two points richer than second placed Sekondi Hasaacas (7 points).

Another giant in the Zone New Edubiase United FC who have won two and lost one will play newbies Future Stars at Bekwai.

The former Premier League side won their first two matches of the season before crashing to a 1-0 loss to Sekondi Hasaacas on Match Day three. Future Stars have picked up only one point from three matches and sit 15th in the table with one point – 5 points behind their host. The match is scheduled for Saturday at the Nana Gyamfi Park at Bekwai.

Elsewhere in Kumasi Asokwa Deportivo will clash with Sekondi Hasaacas. Deportivo have won once and sit in 11th place in the table and head into a game against 2nd placed Hasaacas who haven’t lost in the League thus far. 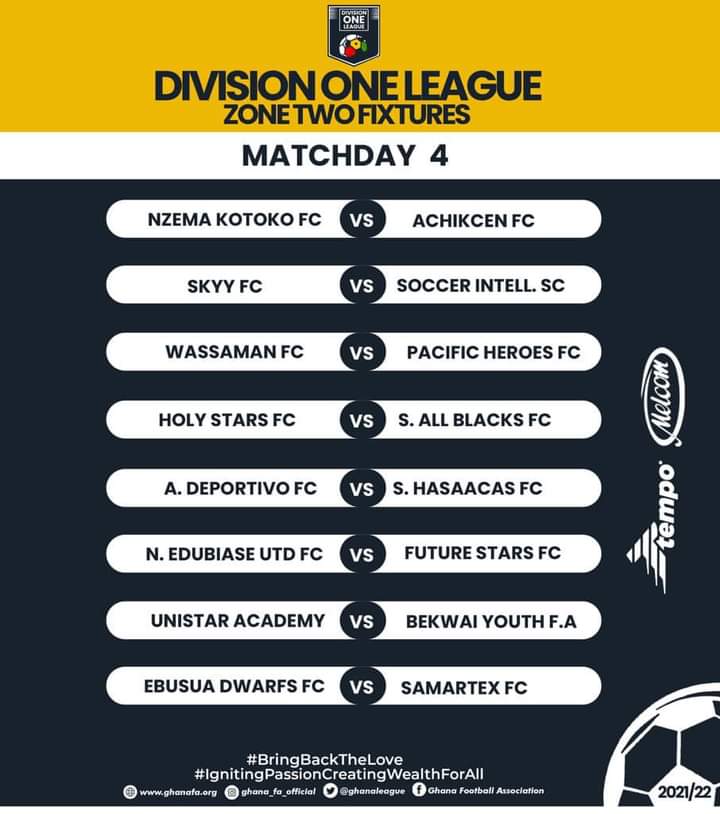 The Sekondi giants have won two and drawn one and sit in second place in the League table with 7 points – only two points shy of leaders Samartex.