FEATURE: The legacy of Riyad Mahrez in English football

by SPORTS WORLD GHANA
in Africa
Reading Time: 3 mins read
A A
0

Riyad Mahrez made his 200th career appearance in the Premier League this past weekend. The Algerian winger notched up a goal and an assist for Manchester City in their 5-2 loss against his former club Leicester City, taking his career totals in the English top-flight to 99 combined goals and assists.

First African player to win PFA Player of the Year

For Ed Aarons, author of the book Made in Africa: The History of African Players in English Football and Deputy News Editor of the Guardian Sports, “Riyad Mahrez’s legacy in English football is massive.”

Speaking to African Football HQ, Ed Aarons told us that Mahrez’s accomplishments in the English game put him among the very best of African players. “He is the first African player to win the PFA Player of the Year award in 2016, helping Leicester City win the league title,”  he said. “That really cemented his place.”

Ed Aarons also pointed to Mahrez’s ever-growing trophy cabinet: “Looking at the number of trophies Mahrez has won, it really puts him up there with the very best” he added. “Two Premier League titles, the Championship title with Leicester city, one FA Cup, two League Cups, and of course winning the Africa Cup of Nations last summer with Algeria in Egypt. It really shows that Mahrez is up there with the very best.” 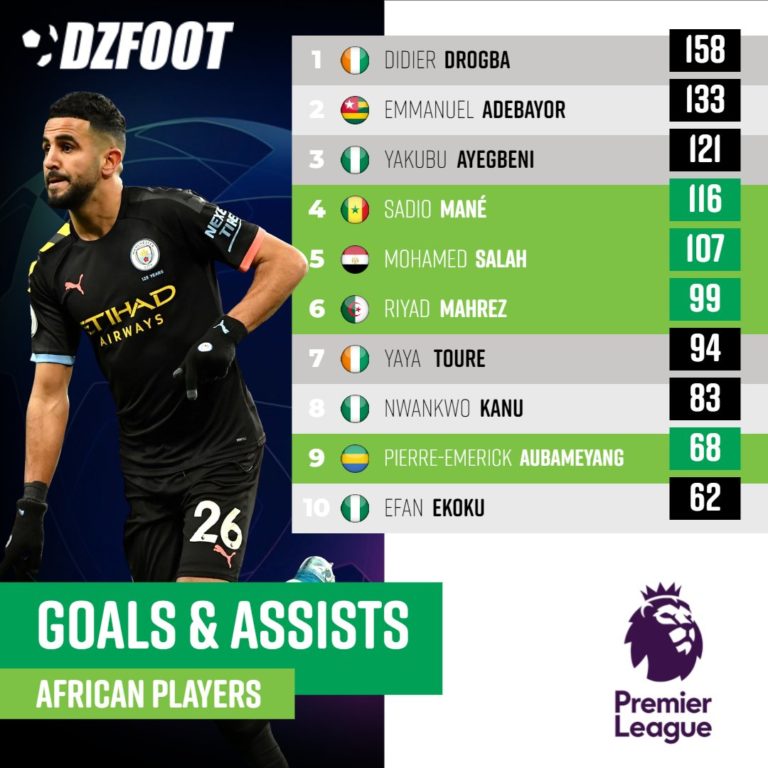 Humble beginnings in the Championship

In 2014, Mahrez moved to English football, joining Championship side Leicester City from French Ligue 2 side Le Havre for a fee of £400,000. The Algerian was an instant success at the King Power Stadium, helping Leicester City win the league and get promoted in his first six months with the club. It would set the stage for even greater accomplishments in the coming years with the Foxes.

Two seasons later, Mahrez became a household name, teaming up with Jamie Vardy to score 17 goals and add 11 assists to help Leicester City defy all odds and win the Premier League title for the first time in the club’s history.

Mahrez’s performances during the 2015-16 season earned him the PFA Players’ Player of the Year award, becoming the first ever African player to win the title. That feat has since only been accomplished by one other African player, Egypt’s Mohamed Salah in 2018.

In 2018, Mahrez joined Manchester City for a club and Algerian record fee of £60 million, becoming one of the most expensive players in the history of African football. After an underwhelming first season at the Etihad where he made just 14 starts, Mahrez showed his worth last season with 13 goals and 13 assists in all competitions.

With the departure of Leroy Sané and David Silva this past summer, Mahrez is expected to play an even bigger role for Pep Guardiola’s Manchester City this season. Last weekend, the Algerian got his season off to the perfect start, getting involved in both goals for City in their 5-2 loss to Leicester City by scoring the first and setting up the second.

While his legacy is already cemented as one of Africa’s all-time greats in English football, the next couple of seasons could put potentially put Mahrez in the same standing as legends like Didier Drogba and Yaya Touré.