0
SHARES
Share on WhatsappShare on FacebookShare on Twitter
- Advertisement -
Ghanaian midfielder Thomas Boakye has extended his stay at Swedish club Halmstads Bollklubb for the next two seasons.
Boakye, 27, has been handed a new two-year deal following his outstanding performance at the club, helping them to secure promotion to the Swedish top-flight league.
- Advertisement -
- Advertisement -
The Right to Dream graduate expressed his delight after signing the new deal, saying ”Magnus likes my attitude on the pitch and on the sidelines. I always do my best for HBK and have respect for the club, and I was very happy when he wanted to write that I would sign a new contract. It feels great to play in the Allsvenskan with HBK,”
Head coach Magnus Haglund also said: ”Thomas is an extremely useful player who is useful in several positions. He is extremely ambitious and a hard-working player in both training and matches, extremely professional. He has a physique that is of international class with his strength and speed, which makes us believe that he can be an asset for us in the Allsvenskan.”

Thomas Boakye joined HBK in 2018 by former coach Igor Krulj, who he previously worked with as assistant coach in Varbergs Bois.
In 2019, Boakye was a bit in and out of the team before Magnus Haglund gave him the confidence as a right outer midfielder. This year he was a bit injured in the beginning and it was only in the ninth round away against Västerås SK that he got the chance in the starting eleven.
The Ghanaian international got his breakthrough when Edvin Kurtulus became ill in September, he took a full-back position and since then he has remained in the starting eleven’s back line. 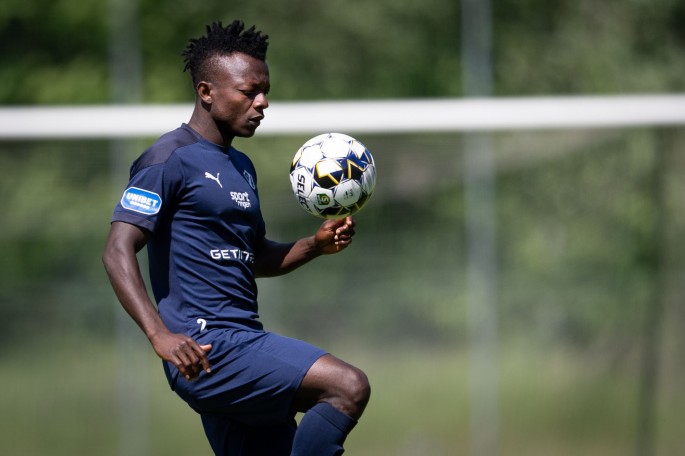