Ghanaian sensation Kamaldeen Sulemana has been named in the WhoScored U21 Team of the Month in Europe for October.

The 19-year-old Ghanaian versatile forward has been in a great shape producing sizzling performances in the past month in the French Ligue 1.

He scored three goals and provided two assists in the month of October which has earned him a place in the Team-Of-The-Month for October.

After moving to the Red and Blacks outfit this campaign, the youngster has been ranked as the best dribbler so far this season ahead of Neymar and Messi in the French top-flight.

Currently, he’s ranked the second best dribbler in Europe this season after averaging 4 successful dribbles per game and 2.3 key passes per game.

Aaron Ramsdale is very quickly living up to his lumpy price tag this season and finished October with a bang with a tremendous showing against Leicester. Ramsdale made eight saves against the Foxes, a personal best in a Premier League game this season. The 23-year-old kept two clean sheets in four league matches last month, averaging 4.3 saves per game across that time.

Academy graduate Ben Johnson has given David Moyes a big problem going forward now Vladimir Coufal is back fit, as the 21-year-old has flourished in his absence. Johnson scored the first goal of his Premier League career at the weekend to cap a fine spell for the youngster. Johnson completed every tackle he made in October, remarkable averagin 4.7 of them per game.

Nathan Collins will be back on the bench now Ben Mee is over COVID-19 but Sean Dyche at least knows he has a capable deputy once time comes for change at the back. Collins averaged 2.3 tackles per game and 1.3 interceptions per game in October, while also making 4 clearances per game and winning 4.3 aerials won per game.

Freiburg youngster Nico Schlotterbeck has become a regular feature in our U21 best XIs this season and it’s surely only a matter of time before a bigger team takes notice. Freiburg are remarkably the only unbeaten team left in the Bundesliga, with Schlotterbeck playing a key role at the back. The German centre-back averaged 4.3 tackles and interceptions combined per game in October and won 2.5 aerial duels per game on top of that.

Making his debut in our U21 best XI is Troyes’ left-back Giulian Biancone. The 21-year-old Frenchman is was unbeaten in his three appearances last month, helping Troyes beat Nice and Reims and draw with Rennes. Biancone averaged 5.3 aerial duels won per game and 5 tackles and interceptions combined per game in that time. Morover, he registered one assist across his three league appearancs.

Borussia Dortmund are adding more millions on to Jude Bellingham’s price tag with each passing week. The 18-year-old scored or assisted in three of his four league appearances in October to cement a place in midfield in our best rated XI. 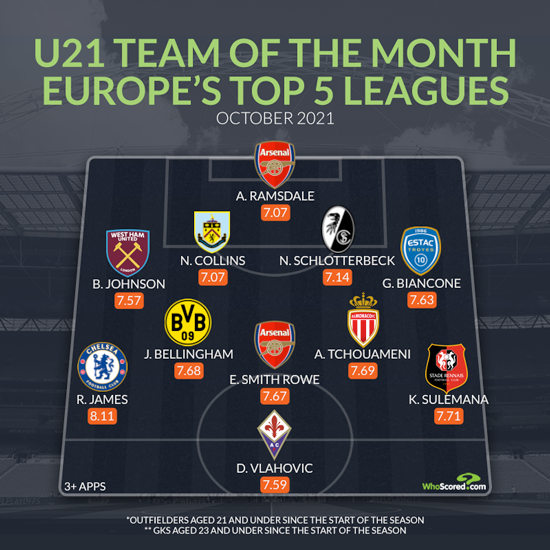 Another promising midfielder set for a big money move in the future is Monaco’s Aurelien Tchouameni. The 21-year-old scored his first league goal of the season at the start of October and went through last month averaging 4.3 tackles and interceptions combined per game. A midfield patnership of Bellingham and Tchouameni is certainly a valuable one.

With three goals in as many appearances, Reece James has profited from Thomas Tuchel’s system that yields goals from every position. The 21-year-old was also the Premier League player of the week over the weekend after netting a brace away to Newcastle.

Emile Smith Rowe has rounded in to top form just at the right moment with Gareth Southgate’s England squad due to be announced late this week. Smith Rowe played a direct hand in three goals in four games for Arsenal last month, with all three coming in his last two appearances. Arsenal’s No.10 certainly has a very bright future.

One of the big success stories of this season in France has been Rennes’ Kamaldeen Sulemana. Rennes have enjoyed some superb wingers in recent years with Ousmane Dembele, Raphinha and Ismaila Sarr all passing through and Sulemana is the latest. The 19-year-old played a direct hand in two goals in four league appearances last month, while averaging 4 successful dribbles per game and 2.3 key passes per game.

Finishing October with a hat-trick certainly helps and Fiorentina sensation Dusan Vlahovic completes our U21 Team of the Month. The 21-year-old finished October with four goals in five games overall and is only three goals behind Robert Lewandowski as the leading scorer in Europe’s top 5 leagues this season. Having turned down a new contract in the summer, the Serbian striker is set to leave over the next two transfer windows and won’t be short of suitors.

French side Rennes with Kamaldeen Sulemana in the squad beat Strasbourg