A first half brace by Terry Ablade was all that separated the sides.

Steve Wigley made six changes after his side edged past Nottingham Forest last week. Most notably, Steven Sessegnon started in midfield and Terry Ablade regained his spot up front. Goalkeeper Alex Borto replaced Taye Ashby-Hammond in between the sticks.

The young Whites got a good feel for the ball early on, moving it around nicely. Marlon Fossey’s early cross was heading for Ablade but a Boro defender was on hand to clear.

Our lads came out firing and took the lead on 7 minutes. Ablade rose highest before heading into the left corner. A superbly taken goal by the Finnish international. 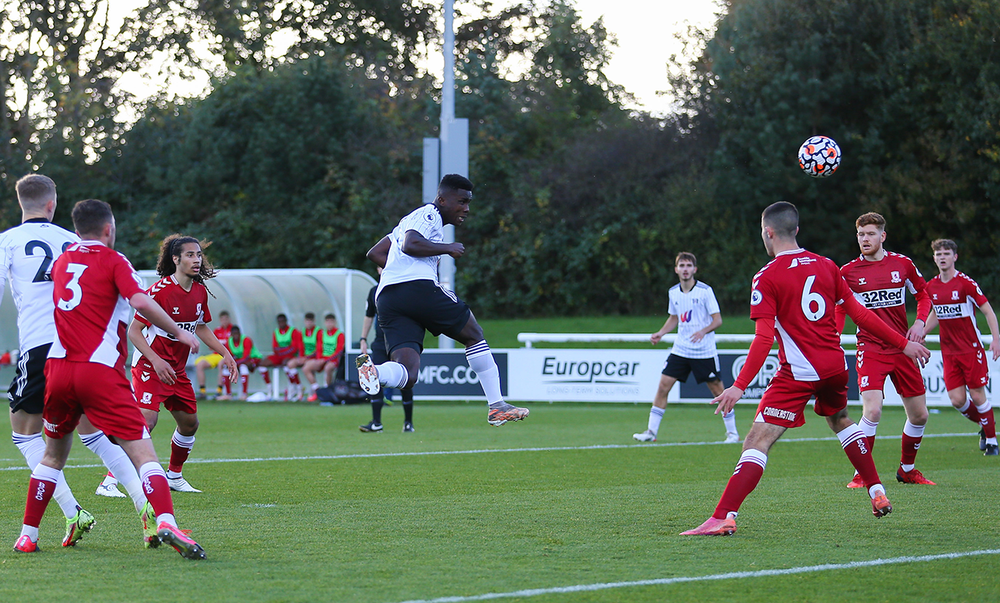 Jay Stansfield nearly made it two a couple of minutes later, lining up a strike from range which rocketed against the crossbar. A fantastic start from our youngsters.

Boro’s first attempt on goal took 25 minutes to come, with Isiah Cornet poking the ball onto his left before blasting an effort over.

Somehow, the away side didn’t get themselves level as we approached the half hour mark. Terence Kongolo’s sloppy pass eventually found its way to Pharrell Willis, who struck the post from a few yards out. A massive opportunity.

They were made to pay for their missed chance, with Ablade adding his second on the half hour mark. Sonny Hilton played a perfect cross from the left which was brought down and tucked away calmly.

Our 23s looked to put the game out of reach a few minutes later. Hilton ran with the ball on the break before fizzing a low drive just wide of the far post. It took a slight deflection off a defender on its way through.

We came close twice in quick succession towards the end of the half. Hilton’s left-footed shot hit the crossbar before Kieron Bowie had a powerful effort excellently saved.

A strong first half performance had our lads two goals to the good going into the break.

Defenses came out on top in the opening 15 minutes of the second period. The first real opportunity came on the hour mark, with Hilton playing an unbelievable ball over the top to Ablade. The forward’s attempted chip was comfortably caught by goalkeeper Max Metcalfe.

The away side pushed for a way back. Sam Forlarin drilled an attempt just wide of the left post from the edge of the box.

Our lads responded well, though. Stansfield’s left-footed effort was well saved and the Boro stopper was on hand a few minutes later to push Ziyad Larkeche’s low effort wide.

Substitute Ollie O’Neill made a strong impact after coming on, dribbling around a defender before spraying the ball across the penalty area. Hilton and then Stansfield both went for it but couldn’t quite direct the ball towards goal.

Borto, who had been kept relatively quiet, was forced into action in the final 10 minutes. Jack Stott hit a low shot towards goal and our American was equal to it.

The visitors went down to 10-men in the final moments after a poorly timed challenge on Jonathon Page.

The result means our Under-23s have won six games on the bounce in all competitions.