Asante Kotoko head coach Mariano Barreto described his team’s 3-2 win over Inter Allies as a tough encounter after Allies equalized twice against the Porcupine Warriors who are back on same number of points as Hearts of Oak who lead the league standings on better goal difference.

Emmanuel Gyamfi opened the scoring for the visiting Kotoko in the 26th minute on the service of Evans Adomako before Alex Aso equalized for the hosts ten minutes later.

Adomako who provided for Gyamfi turned goal-scorer himself in the 41st minute with a clever effort and he was assisted by Gyamfi who returned the favor.

Andy Okpe – voted man of the match – rose highest to bring the game to 2-2 in the 64th minute with a powerful header following a corner kick but Andrews Appau smiled last with a 70th minute as he matched Okpe’s beauty with a similar bullet header from a Fabio Gama freekick.

“It was not an exciting or interesting game for us. It was a tough match.” Barreto said after the game on Monday. 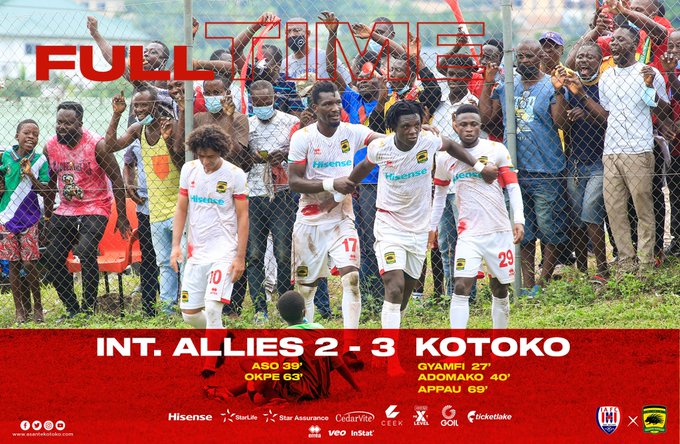 “We knew how Allies play. Using tall players and putting in long balls and unfortunately we do not have tall players like they have. They really made it hard for us. ” the Portuguese added.

“You can see that we played very well in the first half and created some chances, scored some goals. That is the difference between my team and others. We keep on fighting” he added.