Robin Polley: Ghana’s U23 defender who has been following in the footsteps of Seedorf, Van der Sar and Kuyt

Robin Polley has recently joined forces with Clarence Seedorf, Dirk Kuyt, Ruud van Nistelrooij, Giovanni van Bronckhorst, Edwin van der Sar and Klaas-Jan Huntelaar. No, not yet in terms of performance on the field, because the fullback is currently for the second year in a row loaned out by ADO Den Haag to FC Dordrecht and is still waiting for his real breakthrough in the Eredivisie. But Polley, like the six previously mentioned former internationals of the Dutch, has its own foundation, already at the age of 21. By setting up the Robin Polley Foundation, he hopes to provide structural assistance to underprivileged children in Ghana, the country of birth of his famous father Prince Polley. That once started by getting on a plane with two garbage bags with old football clothing for a holiday in his second homeland.

There is no free corner in the basement of Polley. If necessary, he can no longer even park his bicycle there. The space is filled with match kits and training clothes from ADO, soccer shoes from Shaquille Pinas, the old running shoes from Lex Immers, toys collected by Ricardo Kishna and much more. All destined to be brought to Ghana. “Actually that should have happened last summer, but the corona crisis threw a spanner in the works. Maybe I’ll send it in or go to Ghana at the end of this season. Because I couldn’t go there now, the idea for the school books came up spontaneously ”, Polley smiles. Recently, in an orphanage in Kumasi, Ghana’s second largest city, there are a thousand books with his image and that of his father Prince Polley on the cover. 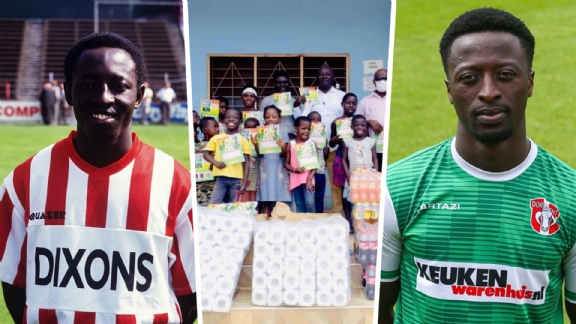 Father (in 1989 in the shirt of Sparta) and son (this season in the shirt of FC Dordrecht) Polley, with the orphanage in the middle where the books with their photos ended up on the cover.

“My father sent me a draft of a book with a picture of the two of us. I asked how he got it and someone turned out to have sent it. My father is a celebrity in Ghana, so people look up to him. ” A greatness is actually an understatement when it comes to Polley senior status in Ghana. The former attacker of Sparta Rotterdam, Beerschot, FC Twente, sc Heerenveen and Excelsior, among others, formed the vanguard of the Ghanaian national team in the early nineties with Abédi Pelé and Anthony Yeboah and shot the Black Stars in 1992 to the final of the Africa Cup, which incidentally was lost against Ivory Coast. After his active career he returned to Ghana, while Polley junior stayed behind in his native city of Rotterdam, together with his mother and sisters. “I really enjoyed seeing myself on a book, so I thought it would be a good idea to take over the design and have a thousand copies printed and donated, along with basic necessities such as food and toilet paper. When my father called me and showed me how they responded, I saw children crying. Because someone was thinking about them. I thought that was so beautiful. Something that once arose spontaneously has already come this far. In this way I want to take steps with the foundation, maybe that I can also provide wells in the future. ”

While support for Ghana is slowly taking on serious forms, it all started quite simply for Polley at the age of fourteen. During a visit to his aunt in the Ghanaian capital Accra, he came up with the idea to train at the local football academy of Awudu Issaka, who played for Anderlecht, Auxerre and 1860 Munich, among others. “I didn’t know anyone there, but they took me so well. Normally they think someone from Europe is a bit arrogant, but I got along very well with them. The trainer and founder (Issaka, ed.) Continues to treat me like his son to this day. Because of the feeling I got then, I wanted to give something back to the boys and that trainer ”, says Polley. A year later he did so by boarding a plane to Ghana with two garbage bags of unnecessary football clothing. 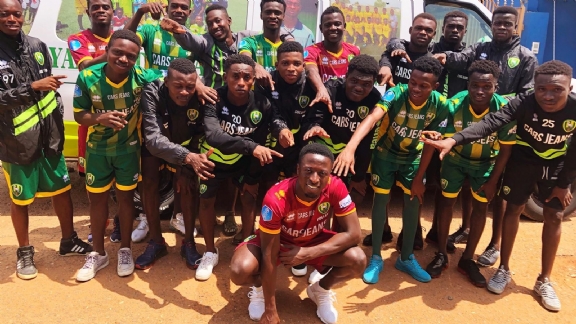 Polley poses in the summer of 2019 with the players from the academy who received the clothing from ADO.

“If I had spare sportswear, I always sent it to a permanent academy. You saw that those children were so happy with it, it was greatly appreciated. For me it was actually a small thing, ”Polley explains. In the meantime, his career took off. Polley was picked up by Feyenoord in 2016 after having played with the amateurs of Rotterdam United (at the time SV JHR) and Spartaan’20 in 2016. After a year with the team from Rotterdam, he switched to ADO Den Haag, where he signed his first professional contract in 2018 and made his debut in the main squad. As a player of ADO, Polley was left with even more clothes at the end of a season. He asked material engineer Rob Ravestein if he could have some of this to hand out in Ghana.

“When the time came, he called me and I got a whole box. That was so much that I was a bit shocked. So many children could be made happy with it. ” So much ADO clothing has now gone to Africa, that at any game on a sandy field near Accra you can find an entire team in the characteristic green-yellow shirt. With the name Polley on the back of each shirt. “They really wanted to play with my name behind. Every year you get eight match kits and I bought a few more from the fanshop. The equipment man also gave me all kinds of training clothes. It was just hard to get so many printed match shirts, so I had to be a little creative. I have an acquaintance at Kelme (Sunil Kalika, his former youth trainer at Rotterdam United and coach until he signed his first professional contract, ed.), So I was able to buy and have printed kits for a very good price. Of course it costs, but I still see them playing in those shirts and they are very happy with it. It’s a small effort for me. ” 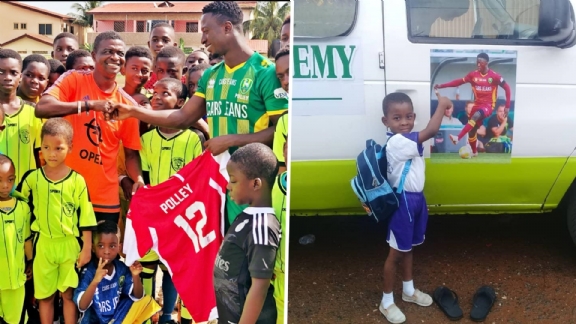 Out of gratitude, a van is currently driving around Accra with the photo of Polley on the side.

“I think that after my second season at ADO I got on a plane to Ghana with a total of fifty sets in my suitcase. I have been able to provide three full academies with new competition uniforms. That is the biggest project I have been able to do so far. When I see those children playing in those shirts, I think: this is what I did it for ”, Polley continues proudly. However, he thinks even further and bigger, partly because of a conversation with Soufyan Daafi. With his company Sport Legacy, he wants to guide footballers towards a second career. Polley indicated in the conversation with Daafi that he was happy to set up his own foundation after his career, in order to be able to offer structural help in Ghana. “Why not now?” Daafi then asked Polley. “He was right about that, I now have an exemplary role. Maybe other footballers can follow the initiative. It all started within a month and there are already several parties who want to support me, to see how I can arrange uniforms for those children. With the donations to the foundation I can be even more creative to get different things done. I want to take it bigger, it must be broader than just sports. Previously I did everything myself and financed it, with the foundation a project leader is joining. It takes a lot of energy and I don’t want it to be at the expense of my football career, because I want to get the most out of it and perform optimally. ”

Polley’s charity work in Ghana has also had a beneficial effect on his career. He appeared on various radio and television stations in the African country and one of the questions was what his goals were. ‘Breaking through at ADO and one day coming out for Ghana’, was his answer. Two months later, his first invitation to the Ghana Under-23 followed, as a result of the matches in the first of ADO against PSV and Vitesse. “It was a surprise, because I didn’t play very much at ADO. There are many guys who play at a high level. I unexpectedly played for ninety minutes against PSV and the national coach of the Under-23 saw me play in it, he was very surprised and gave me compliments. My substitution against Vitesse was then decisive, because a day later I got my first call-up. I was a bit shocked by that. ” 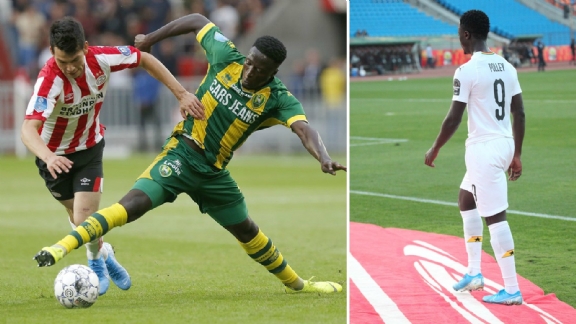 Polley in a duel with Hirving Lozano during the game between PSV and ADO at the beginning of last season and in the shirt of Ghana.

“I have followed Ghana closely from childhood, as a fan I have watched all the Africa Cups and World Cups. With my hand on my chest I sang the national anthem on the sofa, proudly. As a little boy I always said that I wanted to achieve that, that I wanted to become an international for Ghana. I don’t know the national anthem completely by heart, but I do know the first few sentences. When the national anthem was played during my first international match, I saw all kinds of moments flash by. Goosebumps, I really enjoyed that match. It is a highlight in my career that I have been able to play for the Ghanaian team ”, Polley continues beaming. The peak moment of his international career is the Africa Cup for Under-23 teams, in which Ghana was only eliminated in the semi-finals by Ivory Coast after penalty kicks. By coincidence, or perhaps not, the same country that kept Polley senior from winning the Africa Cup of Nations seventeen years earlier.

“I was soon recognized in Ghana by my father. The fact that I was able to reach the national team on my own initiative makes him proud and is the icing on the cake for me. ” Incidentally, his help at the academies and the orphanage has brought him the necessary fame in Ghana. Not only was a documentary about him made and a bus driving around Accra with his photo on the side, but he is also addressed in a special way when he comes to Africa. “They call me then seniorPolley laughs. “That is a kind of sign of respect, because I am a footballer in Europe. They really see me as something great. I don’t really want to be called that, because I am one of them and I want to be seen that way. I feel the best when it comes to equality, because it’s fun to be with those guys and you notice that they come a long way. When I say far, I mean really far. Those guys come from the streets, try to make something of their lives with football and dream of ending up in Europe. Every day these guys send me memos that they are praying for me. You don’t really have to. But the fact that they do it says enough about the appreciation and that is the best.

Asante Kotoko No. 1 Goalkeeper Felix Annan ruled out of the CAF Champions League clash against Nouadhibou