Season Preview: Is a successful title defence possible for Chelsea?

After a disappointing start to the season, a switch to a back-three saw Chelsea effectively run away with the Premier League title.

From October 1st to the end of the campaign, the Blues lost only three top-flight matches on their way to securing the crown, with Antonio Conte’s decision to switch to a three-man defence not only setting Chelsea on their path to domestic glory, but showing that such a system can work in the Premier League. The tough work starts now, however. The previous two Premier League title winning managers – Jose Mourinho and Claudio Ranieri – have been relieved of their duties midway through the following season due to underwhelming title defences.

A winning start on the opening weekend of the campaign would go a long way to settling some early season nerves, especially after their Community Shield loss to Arsenal. Chelsea have never lost a Premier League meeting with Burnley, which bodes well ahead of Saturday.

In the wake of a slow start to the transfer window, Chelsea have invested heavily in recent weeks. Alvaro Moratahas come in as Diego Costa’s replacement up front, while Antonio Rudiger adds not only defensive solidity, but versatility at the back. Long-term target Tiemoue Bakayoko is a fine capture in midfield and Willy Caballero is a solid signing as backup for Thibaut Courtois. John Terry’s sentimental exit is the big name departure, even if he played little last season, while Nemanja Matic is the big money sale, with the Serb one of a number of players to leave the champions, be it on loan or permanently. You get the impression, though, that Chelsea remain a midfielder short following Ruben Loftus-Cheek and Nathaniel Chalobah’s respective exits, particularly on the back of their return to the Champions League.

One to watch – Cesc Fabregas 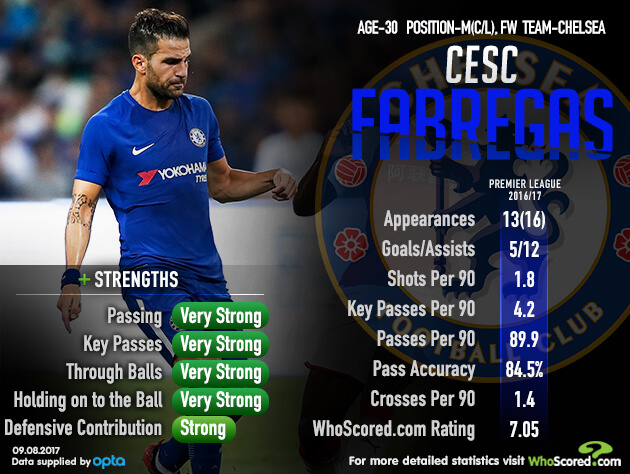 With Tiemoue Bakayoko injured for the start of the season, it’s important for Cesc Fabregas to hit the ground running this term. The Spaniard, who despite a lack of playing time last term still registered 12 league assists, is a crucial asset for Conte, even if he has been strongly linked with a move away from the champions over the last 12 months. His versatility is an added bonus for the Chelsea manager, with Fabregas able to play a more advanced role if required. An assist every 110.7 minutes was the best return of those to register five or more assists in the Premier League last season and he’ll need to be at his creative best to help the Blues to another title success.

The last eight teams to attempt to defend the title have failed to do so, with Jose Mourinho and Sir Alex Ferguson the only two managers to achieve the feat in Premier League history – no pressure then Conte! The added distraction of European football could hinder their chances of domestic success and while a top-4 finish is a possibility, Chelsea are unlikely to top the pile come May.