0
SHARES
Share on WhatsappShare on FacebookShare on Twitter
- Advertisement -
Cristiano Ronaldo scored his fourth goal of the World Cup to become the second-highest goalscorer in men’s international football and, in the process, earn Portugal a nervy 1-0 win over Morocco.

The Real Madrid star followed up his hattrick against Spain on Friday with a fourth-minute header which was his 85th goal for his country in 152 games.

No other European player has scored as many as the Portuguese and only Ali Daei, with 109 goals for Iran, is above him in the scoring charts.

Before the match Portugal coach Fernando Santos said his team must not solely rely on their captain but, once again, it was Ronaldo who proved to be the match winner, though his performance was not as spectacular as his display in the 3-3 against Spain.

The result puts Portugal, with four points from two games, in a strong position to progress from Group B while Morocco’s hopes of reaching the last 16 is over after a second defeat in as many games. 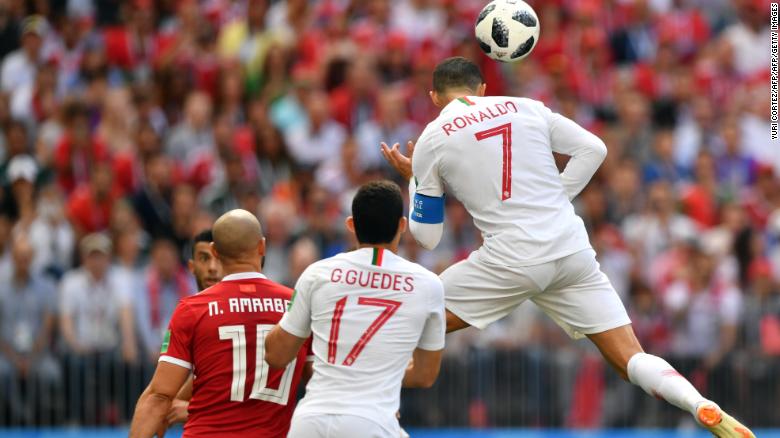 Morocco will rue giving Ronaldo too much freedom in the six-yard box. The Portugal captain’s performance against Spain alone was warning enough of his ruthlessness.
A canny run from the Portugal’s No.7 bamboozled Manuel da Costa, leaving Ronaldo on his own to send a stooping header into the net.

The North African team, who lost to Iran in their opening match courtesy of a 95th-minute own goal, was even more threatening after the break.
Twice they went close before the hour through Younes Belhanda, the forward’s second effort – a bullet header towards the corner — brilliantly saved by Rui Patricio.

Minutes later and Khalid Boutaib should’ve done better other than to shoot over the crossbar and as the game entered the final minutes there was only one team in it — but the score revealed a different story.
Ronaldo had opportunities to double this team’s lead, but in the 50th minute he surprisingly shot high and wild when he had oodles of time to compose himself and his two freekicks were thumped straight into Morocco’s wall.

The captain also put through Goncalo Guedes before the break only for the forward to shoot directly at Monir El Kajoui.
Portugal’s misses mattered little, however, as the European champions secured their first win of Russia 2018.
Report by CNN
Send your news stories to sportsworldghana@gmail.com and via WhatsApp on +233248191999
- Advertisement -
SendShareTweet
- Advertisement -