by Gariba Raubil
in Division One League, Football, Ghana
Reading Time: 2 mins read
A A
0

Tema Youth SC lost the top spot in Zone Three after losing to Uncle T United 2-0 on Match Day seven of the Division One League on Sunday – bringing to an end a four match unbeaten run that dates back to November when they lost to Accra City Stars at home.

The Harbour Warriors fell to two second half goals to the Prampram based side on Sunday following a Felix Duah Doku brace in the 54th and 88th minutes of the match. Tema were flying high in the League and sat at the top of the table for four continues weeks before this weekend’s matches.

They held a 6 point advantage over their opponents heading into the tie on Sunday. The Zone’s top scorer Evans Osei Wusu and Stephen Appiah Asare who have 7 goals in between them failed to score this time leaving them empty handed at the end of 90 minutes.

Akyem Tafo Susubiribi moved to the first spot in the log with 16 points after demolishing Accra Young Wise 5-1 at Akyem Tafo. Striker Isaac Yeboah scored a hat-trick on the day before Richard Amon Kotey and Seth Kumah completed the rout.

Earlier on Saturday, Liberty Professionals fell to Akyem Kotoku Royals 2-1 at the Carl Reindorf Park. The former Premier League side were on a good run having turned their season around with back to back wins in their last two matches after drawing their first four matches of the season.

Kofi Stephen drew the first blood for Kotoku Royals in the 10th minute but that lead lasted for only 14 minutes as Liberty pulled parity in the 24th minute through Ibrahim Jabir.

The visitors scored the match winning goal in the second half through a brilliant effort from danger man Clement Awuonyo. The win takes Kotoku Royals to second place with 15 points – one adrift of the top spot and five points ahead of Liberty Professionals. 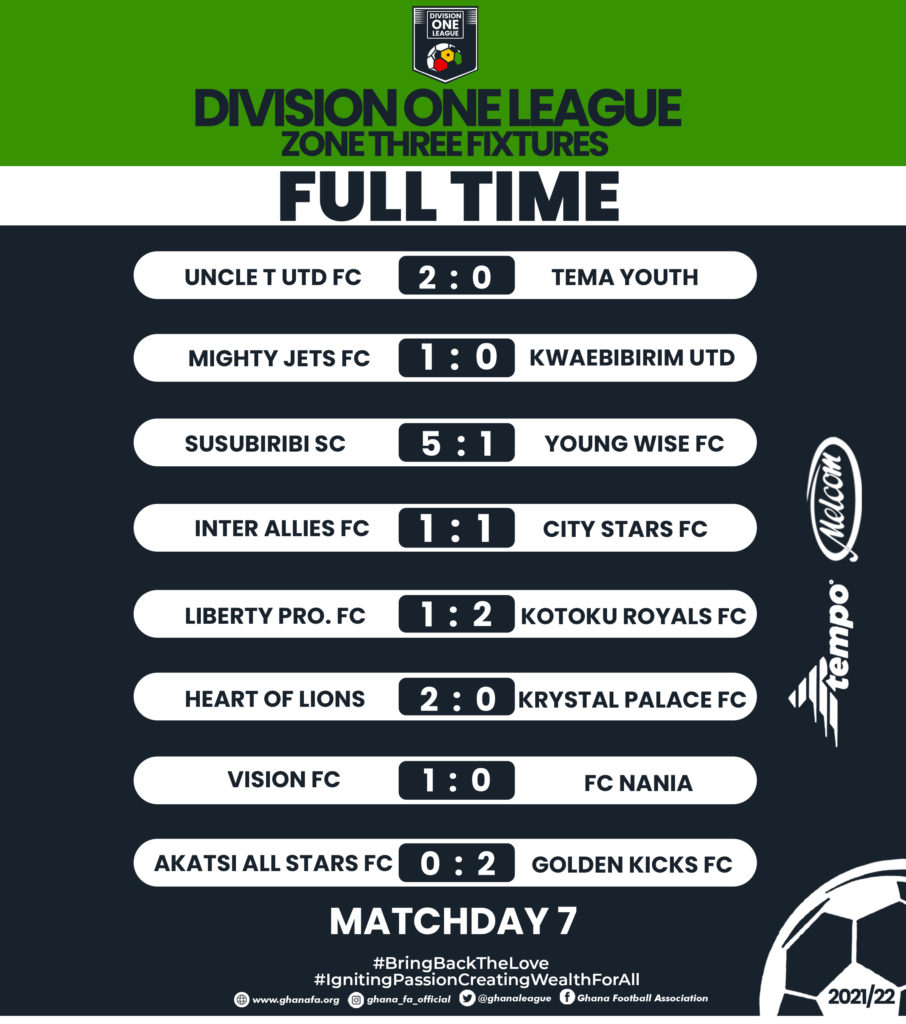 The match between Inter Allies and Accra City Stars ended 1-1 at the theatre of Dreams – Dawu on Friday.