by SPORTS WORLD GHANA
in Football, Ghana
Reading Time: 12 mins read
A A
0

Chris Briandt remains the only local coach who Ghana hugely invested in but could not reap the benefit.He was tipped to be the best coach Ghana has ever produced after his side, Hassacas became the only team to draw against the mighty Fortuna Dusseldorf.To then Ghana Football Association (GAFA) president Ohene Djan, Briandt was the man to bring Ghana laurels. The former Hearts of Oak player was the only coach among the three he sent for a coaching course that Djan could bet on.Ghanaians had high hopes for him. His welcome at the Airport after his course is the most rousing one any Ghanaian coach ever received.But he would go on to only serve as an assistant coach for the Black Stars and go Away Without Official Leave (AWOL) after just a few months.Briandt who felt betrayed after his marriage supposedly got ripped apart by his employer decided to leave the job.His way of rejecting to be a Black Stars coach is a story that needs to be told.How did it happen?At the peak of his years, Chris Briandt was regarded as one of the best players in Ghana. He was a defender who played for Hearts of Oak and the Ghana XI(Black Stars).Along with two other colleagues-Tetteh and James Kenneth Adjaye, GAFA president, Ohene Djan chose them to study coaching abroad.Together with Tetteh and Adjaye, he travelled to Germany for the course supposed to last a year and 6 months.While away, there were rumours that his wife, Wilhelmina Briandt is making out with an unnamed man.Briandt overlooked the rumors but not until he received a letter from a friend back in Accra, who mentioned the name of the person chasing his wife.The content of the letter felt like a dagger put through his heart, and the pain that came with was unbearable.“We would see him weeping uncontrollably in his bed in the night,” his roommate, Tetteh, shared. “He didn’t look all that healthy,” Adjaye, also added.Tetteh recount that Briandt got totally broken and could not concentrate on his course anymore.“It was all hard to take, and it made him realize that leaving had been a mistake. Already, his initial reluctance to go had been a burden enough, and now this piece of news had just pushed him over the edge. “It changed him. He got mad and became nervous. He could barely concentrate on his course from then on.”The pain was heavy to carry, darkness overshadowing the lights in his world all that Chris could do was send GAFA a letter to cancel his course because his interest in becoming a coach has fled out through the window.GAFA acted accordingly and demanded that he should be sent back to Ghana after failing to finish a course proposed by the association.Just as his roommate Adeye said, Chris did not look healthy as his situation landed him at the hospital for about a month.He began to feel “much better” and pleaded with GAFA to re-register him to continue his course.After successfully passing through, he became the first citified black coach and was the first among the three to return to Ghana.His reception and the airport was an eyesore with his wife, Wilhelmina Briandt welcoming her love with a warm kiss. A proud Djan had a chat with her before he met the press and announced that ” “I have learnt enough about coaching. And with the co-operation of the national coach, I hope the standard of Ghana football will improve greatly.” 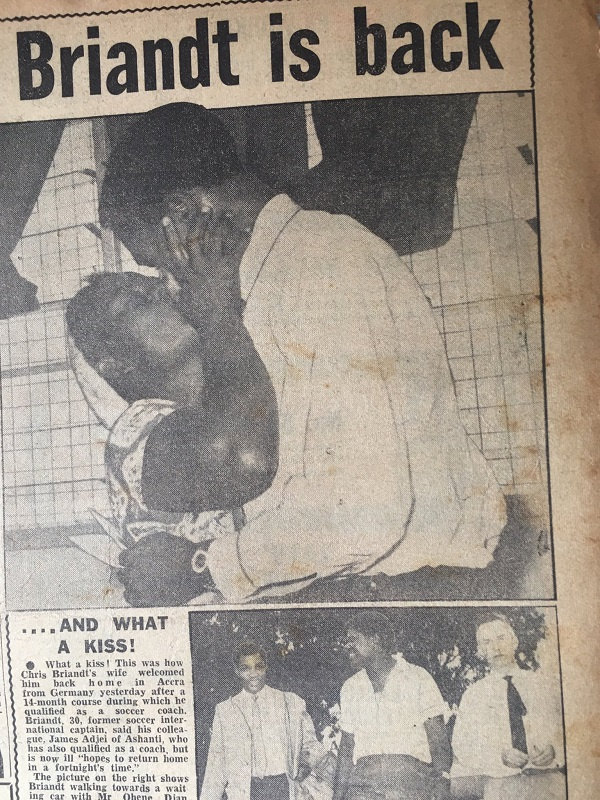 (Picture credit, Daily Graphic)His colleagues arrived two weeks later alongside German club Fortuna Dusseldorf for a tour. A move was planned by Ohene Dyan to put the three coaches skills to test.Fortuna played beat Hearts 3-2 and humbled Southern Ghana 6-1, beat Kotoko 4-3 but could not beat Chris’ Hassacas as their game ended three-all.Fast forward, Briandt was handed an assistant coach role at the Black Stars To Djan, Chris needed a little tweak before he finally succeeds then Ghana coach Andreas Sjoberg.But it did not go as planned after the content of the letter he got while in Germany came hunting.Braindt was missing from the dugout in all the Black Stars games. He handed the car that came with his appointment back to Djan and left without a trace.The public turned against him. Many demanded answers from the GAFA but all they got were evasive answers that did not explain the situation.An editorial by The Daily Graphic read: “We have the greatest admiration for the chairman and council of the Football Association,” it said.“But on this Briandt issue we think that they have sadly underestimated the intelligence of the general public.”“Had somebody forgotten that Briandt was trained at public expense and that the public was interested in his official activities as coach? Is it not realized that information about public organizations is not private property?”In the public eye, he was a traitor.Briandt’s mystic disappearance was never explained until Tetteh and Adjaye lifted the lid on what was the content of the letter.“One of his friends had written to tell him that Ohene Djan was chasing Wilhelmina,” Tetteh reveals.“Yes, it’s true,” Adjaye confirms. “We heard that Djan had gone after Briandt’s wife.”Football legend Dogo Moro who was in Ghana narrated the story of how close Djan became with Wilhelmina after Briandt left.“Many years have passed, yet it still remains a case that the few people who know don’t like to talk about,” Moro adds.“The thing was, Ohene Djan – in an effort to console Briandt’s young wife, owing to the fact that he had sent her husband away – became very close to her. He began taking her along everywhere he went just to make sure she wasn’t bored or depressed.”“They even travelled together during our 1958 Jalco Cup game away in Lagos,” Moro reveals. “As you would imagine, this was never going to end well.”“From the outside, it definitely looked like something was going on (between Djan and Wilhelmina).”“Well, at least everyone thought so. Basically, it was like, even if he (Djan) hadn’t done it, he had done it.”Ohene Djan never admitted to the claim before he passed on in March 1987.For Chris, he could not bear the public’s disappointment so he could only lay low and returned to action when tempers went down. He returned to Hearts of Oak and played before calling it a warp in 1959.Extra info from Fiifi Anaman’s An African sports tale of romance ,betrayal and tragedy (Part II)