by Kay
in Football, Ghana, Premier League
Reading Time: 1 min read
A A

Prosper Narteh Ogum has officially resigned from his role as head coach of Asante Kotoko after bidding the club an emotional farewell.

Ogum described his sudden departure from the club as regrettable in the letter written by the former WAFA man.

He also mentioned that though it was a dream to lead the Porcupine Warriors, his exit is to ensure the best for the Kumasi-based club in the future.

Ogum joined Kotoko ahead of the 2021/22 season and led the club to their first league title since the 2013/14 season.

Video: Watch Ransford Yeboah’s third goal of the season in win over Hannover

However, months after winning the league, the coach handed in a resignation letter ahead of the club’s preparation to play in the CAF Champions League.

Though there has been no official communication from the club yet, Ogum has gone ahead to release his farewell to the team. 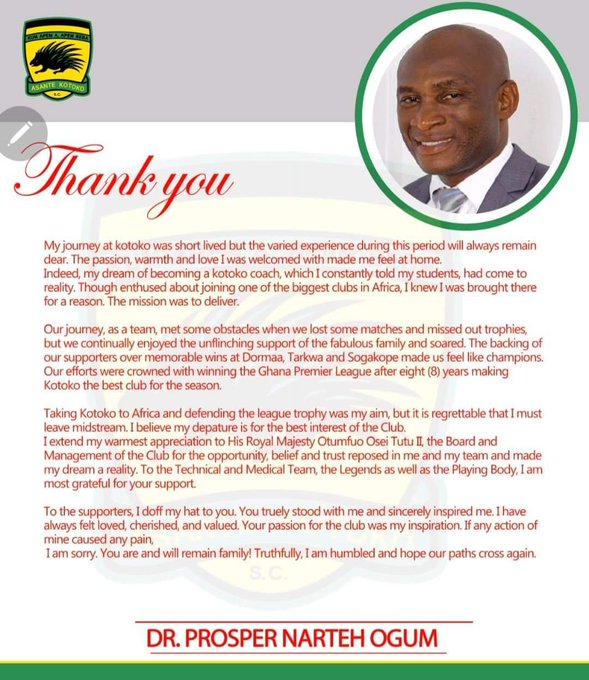 Video: Watch Doris Boaduwaa’s strike against Netherlands in the U-20 Women’s World Cup

“Our wins at Dormaa, Tarkwa and Sogakope made us feel like champions” – Ogum

‘We shall get there’, says Kotoko misfiring striker Mukwala after Nsoatreman victory