Black Stars captain Andre Ayew was solely on target for Swansea City on Monday night during the semi-final tie of the 2021 Championship Play Offs as the Swans takes a first leg advantage on the road and has now scored 58 goals in British football.

The Ghana international scored in the 39th minute with a brilliant effort in the box , dazzling and dancing around couple of opponents before curling the ball to the far right corner of the goal.

The talented footballer left French football after the 2014/15 season and took his trade to the English game by joining Swansea City.

This season he has 16 goals and 4 assists in the Championship for his team but the breakdown of the his 58 targets in the English game is as follows: 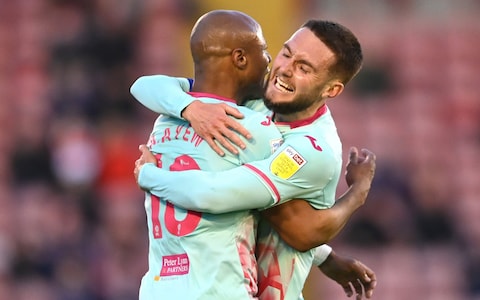 Ayew is congratulated by teammate Matt Grimes after the Barnsley win.

The second leg comes off 22 May and the winner of this tie will meet the winner of the tie between Brentford and Bournemouth in the Play Off final where the winner qualifies to the 2021/22 English Premier League.

Norwich and Watford have qualified automatically to the Premier League next season as they finish first and second respectively.