Mido- Playing for Tottenham was an honour, fans were great to me

Former Egypt striker Ahmed Hossam Mido has described his stint at  Tottenham Hotspur  as enjoyable, lamenting his decision to leave the club earlier than expected.

Mido joined Tottenham on loan from Roma in 2005 and his impressive impact with the team convinced the Spurs to hand him a permanent stay at the club.

“I had some great days and made great friends. It was an honour to play for Tottenham. I wish I had stayed (longer). One of the biggest mistakes throughout my career was to decide to leave,” Mido told Tottenham’s official website.

“Tottenham is a great club and I’m still a great fan. I follow every game and I’m very glad we’re doing well. The fans have always been great to me, since day one I was lucky that I started well – my first game, two goals. I remember I played for an hour. I wasn’t 100 per cent fit because for two or three months before that I wasn’t playing regularly for Roma.”

Mido has collected 61 appearances during his two-and-a-half year stay at Tottenham where he scored 19 goals and assisted other three.

“I just enjoyed it. The lads helped me in my first couple of days to get used to the way we wanted to play and (manager) Martin Jol helped me a lot. It’s important to start well when you go to a new club and for me, it was a great start.”

“We had great strikers. It was amazing to play with Jermain Defoe, Robbie Keane and Dimitar Berbatov. I played with Fredi Kanoute as well. We played with two strikers back then under Martin Jol. He always liked the 4-4-2 system. It was great to play with those players – great players.”

“I’m calmer now but you don’t want to upset me! When you are a manager, you are responsible for everyone, your staff, your players, the whole football club sometimes. You need to be calm to make the right decisions. I was lucky I started the job early and I’ve learned a lot through the jobs I’ve had already. It’s so much pressure but once you get into coaching, you can’t get out of it. But I love the pressure – I enjoy it.” 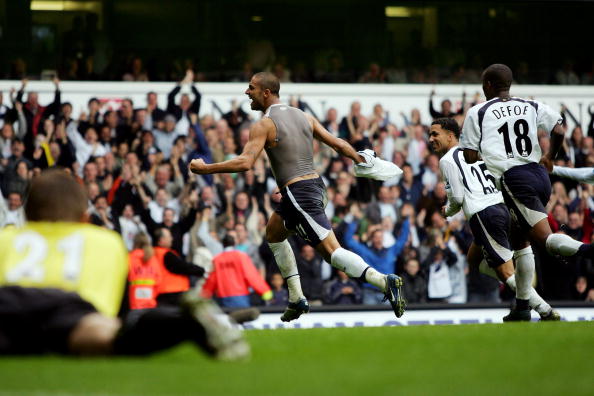 “I’m doing a Masters in Football Coaching Development at South Wales University. I’ve done my coaching badges, the C, B and A in Wales, and I’m enjoying coaching and my TV work. When I retired I started to do some TV work but then I got thrust into management work straight away.”

“I managed Zamalek, one of the biggest clubs in Africa, and we won the Egyptian Cup, then (I managed) two other teams. Now I’m studying and looking forward to my next step, watching a lot of games, trying to meet a lot of managers, trying to learn. I want to be readier before taking my next step.”